I’m finally getting around to reviewing THE INVITATION. Sorry it’s taken me a while, but I put it off until the live-chat with the Graveyard Shift Sisters. Check them out HERE

So let’s movie on to the film!

THE INVITAITON is about Will(Logan Marshall-Green) being invited to a dinner party along with his current girlfriend and some of their mutual friends. But this isn’t any old dinner party…the hosts are is ex-wife, Eden(Tammy Blanchard), and her new husband, David(Michiel Huisman) at the home where they were once a happy family. As dinner progresses and a few more strange guests show up, Will senses that something is wrong and that danger is just waiting to jump out at every corner. But is it just his paranoia playing tricks with his mind or is this party going to be the end for everyone invited?

This movie does the trick in getting your skin to crawl! It covered a lot of topics like how we respond to awkward situations, how we come to terms with traumatic events, death, cults, and gaslighting. Here’s some of the things I enjoyed about the movie.

First is Will’s state of mind: From the beginning, he was uncomfortable with the idea of going back to the house where his child once lived, where he was happily married, and see his ex-wife with someone else. Anyone would hate being put in that situation, but we are programed to be polite and not ruffle anyone’s feathers. If he didn’t go then he’d be the asshole ex-husband still bitter about the divorce. So he goes in and the very moment he steps into the house, he is hit with a memories of his son. Although it’s not spoken about, you understand that it was the death of their son that ended Eden and Will’s marriage.

Which leads me to the second topic: Death. While Will tried to move cope with his son’s death one way, Eden ran to Mexico where she found some guru who supposedly had the answers to her grief. That’s where she met David and made friends with Sadie and Pruitt. To make this dinner awkward to start off with, the hosts and their friends decide that they want to share a video about the cult(because we all know that’s what it is) called THE INVITAITON and share stories about why they sought help with this guru. Death is such a morbid and taboo topic to bring up even among friends. It’s especially more uncomfortable when a stranger talks about how he accidentally killed his wife and being shown a video of a terminally ill woman’s final moments. If it was me, I’d have left at the beginning of the party.

Third topic: how to deal with traumatic events. While Will seems like he’s handled the divorce and his son’s death as well as can be expected, being in that house has made him truly face his inner demons. Someone in the live-chat on Twitter pointed out something that described it perfectly. There’s a point where Will is talking to his girlfriend, Kira(Emayatzy Corinealdi), and says that he feels like there is a scream trapped in his throat. That was a beautiful way to describe how trapped he feels with his emotions. With Eden, she attempted suicide before and then sought out this cult for answers and hasn’t been seen by her friends for two years. These two showed that everyone reacts differently in grief. Some try to move on and have to wrestle with their heartache constantly while others run away to find the answer they want with people who feel the same as they do. This makes the relationship between Eden and Will so tragic because they never really had the time to find closure with each other. Only in the end when Eden shoots herself in the stomach does she confess her grief to Will and apologize for everything.

Fourth topic: Cults. This film reminded me of Jonestown so much that I got a little uncomfortable. Like most religious ideologies, THE INVITATION group claimed to answers for how to deal with pain whether physical or emotional. This cult advertised itself as a spiritual group that tried to get people comfortable with the inevitability of death hence the video of the terminally ill woman and how easily Pruitt could talk about his wife’s death. Most people wouldn’t bring that up EVER let alone at a dinner party. I thought of Jonestown because the true motivations of this cult is revealed when the party is about the give a toast, but Will senses that the wine has been poisoned. Turns out his paranoia served him well. The hosts and their friends had planned to kill their guests and themselves so they could be free of their earthly pain. Jonestown is notorious for its Mass Suicide event or Mass Murder depending on how you look at it. What makes it more terrifying is that this dinner party wasn’t the only one of its kind. In the final scene of the film, chaos has erupted in L.A. when the surviving guests see red lanterns all across the neighborhood like the one David lit in the yard along with screams, gunshots, sirens. Can you imagine living in a neighborhood where your neighbors are part of a death cult and committing murders all around you? HELL. NO.

Fifth topic: Gaslighting. For those who don’t know, gaslighting is used in abusive relationships where the abuser twists situations and information to make the victim doubt themselves. Throughout the movie, Will is clearly uncomfortable and anxious. Rather than say “You don’t have to stay. Please go home and we’ll talk when you’re ready” both the hosts and the other guests make Will out to be the bad guy. They make it seem like he’s the crazy one, that he’s just emotional because of the house, that he’s the one being a jerk, and he’s the one being unreasonable. David even pulls Will aside and shames him by commenting that Will is being ungracious by “being suspicious of our hospitality”. When Sadie starts making out with the other guests, Claire is the only one who has the guts to say “I want to leave”. David tries to convince her to stay and, I felt, that he was kinda making it out that she was being a prude and that Sadie is just a “free spirit” and she meant nothing by her erotic behavior. He even blocked the door. It’s like he was trying to guilt her into staying. I would have ran right out the door!

All together, THE INVITATION was an amazing movie. The live-chat on Twitter was so much fun because I got to read someone else’s thoughts on the movie. Some people brought up some interesting things like the music, the “scream trapped in my throat” line, and even how the color red became important. I hope we get to do another live-chat during a horror movie soon!

Let me know what you thought of THE INVITATION! 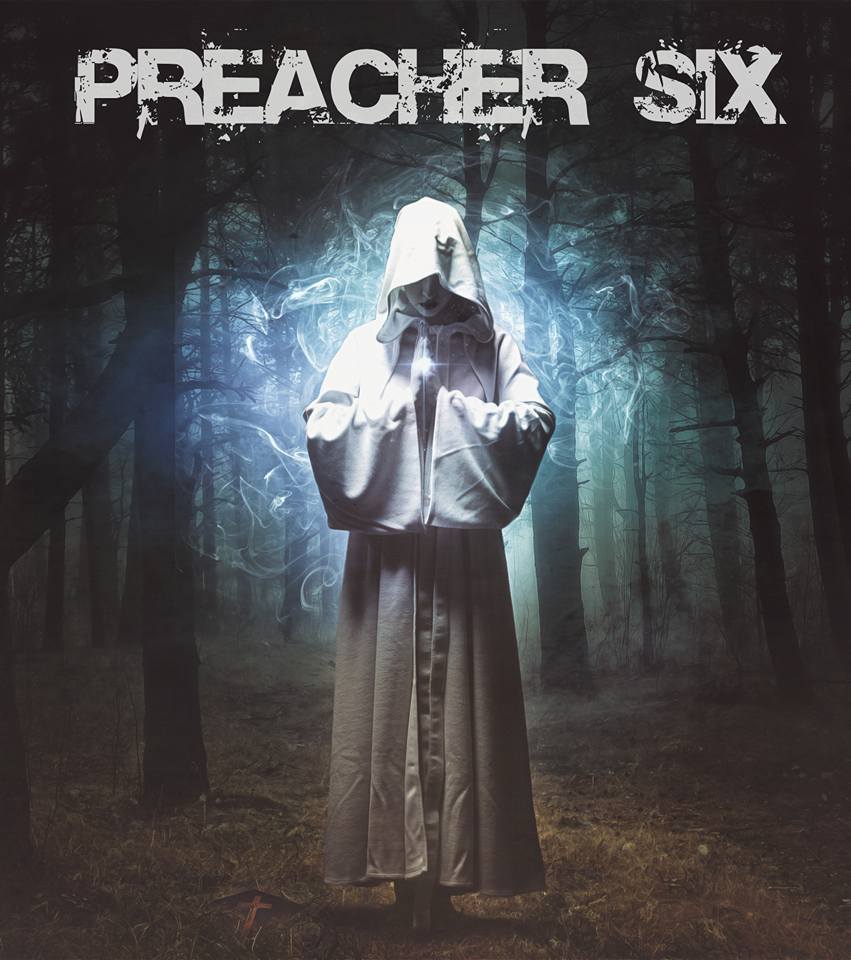 Alrighty, Everyone! Let’s get together and talk about supporting Independent Films!

So I’m cruising the Twitterverse when a lovely group called Hollywood Magic Productions sent me a message asking for some support for their new project, Preacher Six. So I follow the white rabbit to their GoFundMe page to check out what this project is.

Honestly, they had me at “If you like Quinten Tarantino films, you’ll love this one!!” Who doesn’t love Tarantino? Anyway, the page goes on to describe this project as Taxi Driver meets Sin City….I fucking love Sin City!

Of course, when you generously donate to this project, you’ll get awesome rewards such as: a Shout Out on Twitter, a signed Postcard, a signed DVD, name in Credits, etc. Obviously, you’ll need to check out the GoFundMe page HERE to see the rewards that go with the amount of donations.

Anyway, check out their page and go on their Twitter HERE and see what’s up!

Alrighty, y’all! It’s time for GISHWHES again and I really hope that you guys take a chance to check it out. i had a lot of fun last year and I’m super excited for this year. I have some of the same team members from last year which makes me very happy. Thank you, Robin for sponsoring me this year. I promise someday I’ll return the favor.

Anyways, If any of you register for we have a few spots open for our GISHWHES team mishasminions2.0. So check us out and hopefully you’ll join in the fun. That’s what it’s all about!

You have 6 days left to register so you better hurry!!

Normally I, Damsel Bruja, am the one who likes to fiddle with the Twitter account. The reason is I have my own personal account strictly for personal use. However Damsel Cannibal has another Twitter account where she likes to talk to anyone and everyone in the Indie Horror circuit.

Feel free to follow us and comment on our posts. Or if you just want to talk about some randomness in the Horror genre then by all means send us a message.

I’d also like to take this moment to say that I’ll be using the Damsels with Chainsaws twitter to live tweet during Penny Dreadful. So far this is my favorite show on TV that has to do with horror and I’m hoping there are other Dreadfuls out there who like it too. 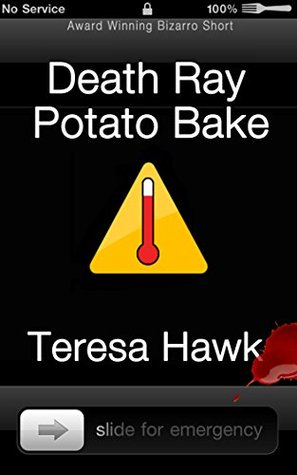 I only know (knew?) Teresa Hawk from Twitter. She used to tweet all the time but I haven’t seen her around in months. I would provide her handle but her account is no longer active. For shame. Her tweets were hilarious. Anyway.

I happened to receive “Death Ray Potato Bake” for free on Amazon Kindle months ago but forgot about the thing until I saw it in my library today. It was St. Patrick’s Day–Irish people and potatoes are stereotyped together, so what the hell, I thought. Might as well be festive. And I read it.

So many authors try (and miss the mark) to be both funny and suspenseful, but Teresa Hark succeeds on both counts. What an entertaining read! Who doesn’t fantasize about killing their mother? With a potato?

Bizarre, smartly-written, and creative. I would recommend this little short for people who take a dash of dark comedy with their horror. Her writing style is dry, mocking, and effortlessly funny without calling attention to itself. I smiled the whole way through. Solid five stars. I know Teresa Hawk has written other short stories and so I will be definitely read more as soon as I am able.

Check out her books Goodreads.

We Damsels are going to be on a small break for the next few weeks. Damsel Cannibal is making a big move and it’s gonna be hard writing some amazing posts when you’re busy unpacking and getting settled into a gorgeous house.

So while you wait for more updates from us why not check out our Twitter page: @DWCHorror to see what crazy comments we come up with. Leave us a comment, ask us a question, share some pics, etc. We want to hear from you!