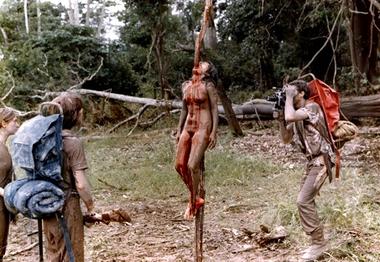 This iconic scene from the movie, Cannibal Holocaust (1979) was so troubling to Italian authorities, the director, Ruggero Deodato was forced to prove the images were fictitious in court and explain to law enforcement that he hadn’t actually killed anyone.

But since I’m on the topic of Eli Roth’s new movie, here’s what I’ll say about it for now. When I see it, I’ll compare it against Deodato’s version and write up a gratuitous review for your enjoyment. Trailer below:

Do I think Eli Roth’s movie should be banned? Do I think a movie about white, social justice warriors getting brutally massacred by brown people is offensive? Ha. What do you think? More often in horror movies, brown and black characters are slaughtered without dignity for white entertainment. Our bodies are still first to be jeopardized onscreen and off…so am I supposed to wave torches and pitchforks over fictionalized, reversed-racial horror? You’ll find out when I watch Green Inferno.

But I digress. Let’s listen to the maestro, shall we?

What made Cannibal Holocaust so great was the off-kilter soundtrack. I use “off-kilter” ironically, because in truth, there is nothing off-kilter about it. It’s fucking beautiful. I adore horror movies with a full orchestral score and my absolute favorite composer for that sort of thing is Bernard Herrmann. However Riz Ortalani’s score is a must for any horror movie buff, too. Not only is the soundtrack beautiful, but when combined with scenes from the movie, the result is a strange, horrifying cognitive dissonance. Modern horror filmmakers alert audiences to the horror with music that is meant to frighten us. But Riz doesn’t do that, here. Instead, he uses sweeping violins, folksy guitar, and funkadelic pops of the synthesizer. By listening to the soundtrack alone, you would never know it accompanied such a gory, controversial movie.

There are 10 tracks in all but my favorites are Adultress’s Punishment (the infamous impaling scene) and Savage Rite. If you write horror, I strongly recommend you try listening to the Cannibal Holocaust soundtrack to get you in the right mood.

Have you watched Cannibal Holocaust? Green Inferno will come out September 25, 2015. Place your bets which one will be better. Whadduya think, fam? Should we all be outraged?