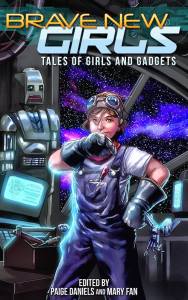 Could it be? Could there actually be a book out there that shows off intelligent girls saving the day? My mind has been blown! For too long Young Adult fiction has been all about shy naive girls who only find completion when they get a boyfriend. But no more! Here we have this cute anthology that seeks so show our future female engineers, inventors, programmers, etc. that they’re allowed to dream of bigger and better future. Did I also mention that proceed from sales will be donated to a scholarship fund through The Society of Women Engineers?

I’ll review a couple of the stories so you get an idea of what I’ve been enjoying.

This collection of sci-fi stories features brainy young heroines who use their smarts to save the day. Girls who fix robots and construct superhero suits, hack interstellar corporations and build virtual reality platforms. Who experiment with alien chemicals and tinker with time machines. Who defy expectations and tap into their know-how-in the depths of space, or the bounds of dystopia, or the not-too-distant future-to solve despicable crimes, talk to extraterrestrials, and take down powerful villains

One of the reason I love science fiction is because of the inspiration it can give for the reader. For example, one of the stories I liked was The Keys to the Starts by Stephen Kozeniewski, was about a young girl having a close encounter with a friendly alien. She learns that colonization/invasion isn’t just an Earth thing and that the best chance that Earth has is to change for the better. We’re always told that children are the future, but it’s refreshing to see that scenario play out.

Interested in time travel? I enjoyed Blink by Kate Moretti which is about a girl with a time machine named Fitz and her struggle to keep Fitz from her friends and the school bully. I think we all remember that one mean bitch that did everything in her power to make high school hell. But this heroine didn’t let it bring her down! Instead she used Fitz to help preserve the Timeline! It was fun to read. I actually smiled and giggled throughout the story.

Anyway, I’m giving this Four Stars instead of Five because this is a Young Adult anthology. Not saying that as an adult you shouldn’t read Young Adult, but I haven’t been a teen in a while so I found it hard to connect with the characters sometimes. But I’m totally going to recommend this to my niece! So pick up your copy today!!